Note 1: All the of this presentation is published in this repository. You will find a lot of folders and information, probably part of a blog series.

Note 2: All the work on this article is a POC (Proof of concept).

Note 3: This is something that is related for HIPAA compliant.

The POC on this article was developed before the releasing of the Key Management service for RDS.

I totally discourage to use the current approach for encrypting data. Use REST.

I’ve been dealing with an issue that came into my desktop from people of the community, regarding RDS and HIPAA rules. There was a confusing scenario whether PostgreSQL was using FTS and encryption on RDS. There are a lot of details regarding the architecture, however I think it won’t be necessary to dig into very deeply to understand the basics of the present article moto.

HIPAA rules are complex and if you need to deal with them, you’ll probably need to go through a careful read.

tl;dr? they tell us to store data encrypted on servers that are not in the premises. And that’s the case of RDS. However, all the communications are encrypted using SSL protocol, but is not enough to compliant with HIPAA rules.

CPU resources in RDS are expensive and not stable sometimes, which makes encryption and FTS features not very well suited for this kind of service. I not saying that you can’t implement them, just keep in mind that a standard CPU against vCPU could have a lot difference. If you want to benchmark your local CPU against RDS vCPU, you can run the following query inside psql on both instances:

There are a lot of things and functions you can combine from the pgcrypto package (you will see that the repository contemplates all of them). I will try to post another blog post regarding this kind of benchmarks. In the meantime, this query should be enough to have a rough idea of the performance difference between RDS instance vCPU and your server CPUs.

For this POC we are going to store FTS and GPG keys locally, in a simple PostgreSQL instance and, using a trigger, encrypt and upload transparently to RDS using the standard FDW (Foreign Data Wrappers).

Have in mind that RDS communication is already encrypted via SSL when data flows between server/client. It’s important to clarify this, to avoid confusions between communication encryption and storing data encrypted.

The simple trigger will split the unencrypted data between a local table storing in a tsvector column (jsonb in the TODO), it will encrypt and push the encrypted data into RDS using FDW (the standard postgres_fdw package).

A simple flight view of the idea can be observed in the image bellow. 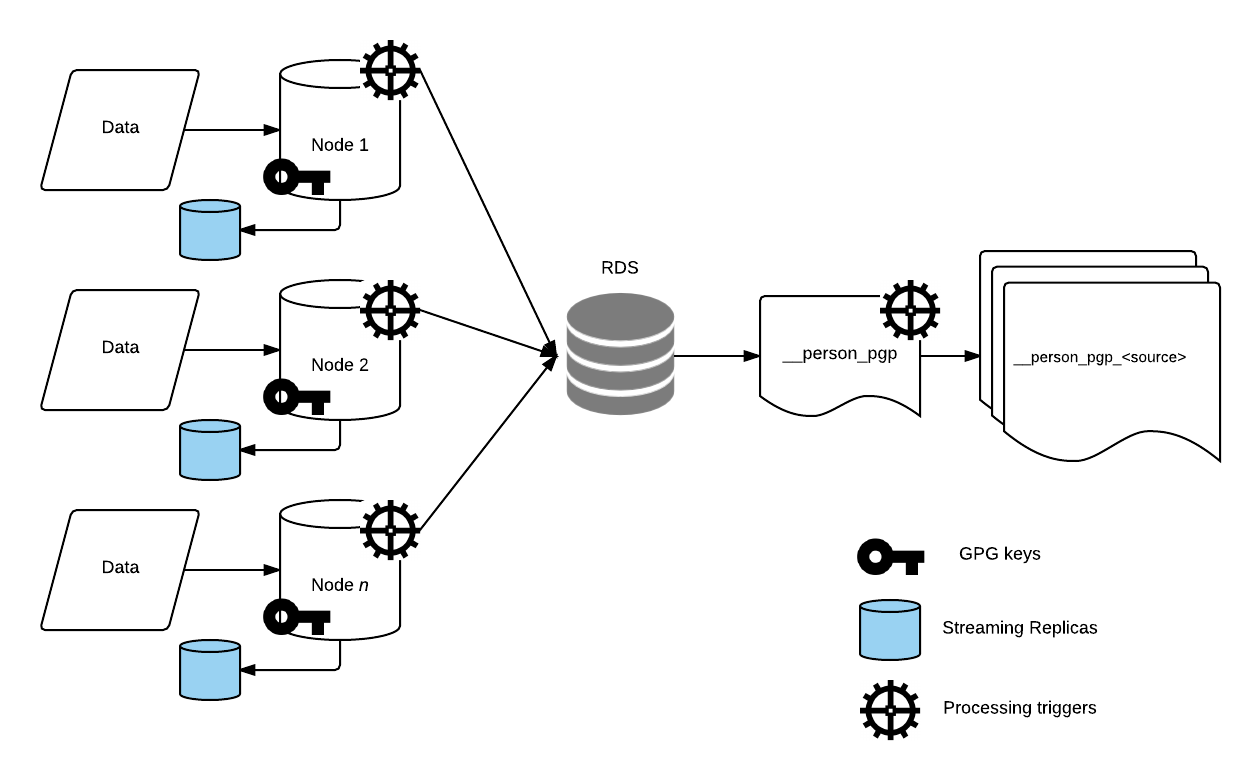 We are not going to use the partial SSN column in the examples, but I found it very helpful to do RDS searches over encrypted data without fall into the need of decrypting in-the-fly the SSN. The last SSN’s 4-digits do not provide useful information if stolen.

Also, the magic of the multi-source data injection comes from the compound key using a bigint and a source tag.

Basically, you can think on the local nodes as proxies. You can insert data on every node, but the data will point to the RDS instance.

If you are planning to manage large amounts of data, you can partition the table on RDS, allowing a better organization for data management.

You will see no indexes over encrypted data

Same table. Everytime we want to deal with the RDS table, we are going to do so using the __person__pgp_RDS table, which is just a mapping table. We can query this table as any other usual table.

For testing purposes, I also created a table with the same structure as the above with __person_rds_RDS_URE table name and added the use_remote_estimate 'true' option. When enabled, postgres_fdw obtains the row count and estimates from the remote server.

Just to avoid an extended article, I will skip the GPG key creation commands here. Please follow the instructions on the link at the referece section about keys.

We can insert they keys in several ways, but I found very convenient to use psql features to do so. Once the keys are in place you can use \lo_import command:

The next steps are very straightforward. In a real scenario, you won’t probably want to upload private keys into the table, just for practical purposes of this article I’m going to do so (only for decrypt data in the SELECT query).

pgp_key_id will return the same key no matter if you use private or public key.

Splitting data to FTS, encrypt and push into RDS

Now, here is when the tricky part starts. We are going to achieve some functionalities:

Doing this, you avoid to have a column with a constant value in the table, consuming unnecessary space. You can have with this method, different names and tables accross the cluster, but always using the same query against local_search. You can map/reduce the data if you want to across the nodes, with the very same query.

Is not necessary to only have 1 source or route per node. The only requirement for this is to have different routes per node (combining source and route could increase complexity, however is possible).

This functions does everything. It inserts the data on RDS and split the data on the corresponding FTS child table. For performance purposes, I didn’t want to catch exceptions at insert time (if the child table does not exists, i.e.), but you can also add this feature with an exception block as follows:

Check “Appendix A. PostgreSQL Error Codes” on the official manual for references about error codes.

At insertion time, we are going to push data through a mapping table. The reason for this is that all the encrypted data is stored in bytea datatype, and we want to have clear queries instead.

A random data query will look as:

Did you see the inner comment? Well, probably you want to split by customer or any other alias. I’m using this ugly harcoded text just to avoid a long article.

Also, if you want to avoid harcoding as much as posible, you can consider to use a function that returns the host name or routing tag.

We are almost done! Now we can do some queries. Here are some examples:

All the matches and double check from were the data came from:

And, we can’t finish the article without showing how to use the ranking (did you see those setweight functions used in the function? You got it!):

Remember, think that this query is doing FTS, decryption and ranking in just one query, over a local and a remote server. You can’t say that PostgreSQL isn’t hipster enough!

I can’t continue the article without showing the query plan executed by the local host (using buffers, analyze and verbose options).

From the above Query Plan extract, we can see that the partitioning at RDS is transparent for the query. The execution node in charge of extracting data from the RDS is the Foreign Scan, which also provides the query executed remotely.

Wait a minute. Looks like the remote SQL is somehow dangerous to execute. It is not using the id! There is a reason for that, and its related on how postgres gather the foreign table statistics. If I use the remote estimations we can see how the remote SQL changes in the Query Plan:

After analyzing both foreign tables , the execution time difference was calculated at 11% in favor of using local estimations.

NOTE about UPDATES: it is necessary to code the UPDATE trigger also, in order to decrypt , modify and re-encrypt the data.

Json/jsonb datatype is here to help

You can collapse all the data and use json datatype on the mapping and foreign table, allowing you to avoid the pain of pointing and decrypting data per column basis.

Put all the encrypted columns in a bytea column on RDS. The mapping table will look as follows:

At insert time, just use a json column instead per column basis. Keep in mind that you will need to deal within the json contents. I found using this easier for insert, but the FTS needs some clean up to avoid insert column names in the _fts field at local_search tables. Also, for updates, the jsonb datatype will need extra work when extracting attributes.

In the insert statement above, you will see a user defined function that gets a random length vector of drugs. It is implemented using the following code:

A very awesome tutorial about FTS for PostgreSQL can be found here.

Getting started with GPG keys