Heya! I this article we are going to explore two of the major features commited in the upcoming PostgreSQL release: Logical Replication and Partitioning. Needeless to say that these features aren’t yet available in the stable release, so they are prune to change or extended.

Advertising warning! The current article is just a sneak peak of the upcoming talk Demystifying Logical Replication on PostgreSQL at Percona Live Santa Clara 2017. Get your tickets!

The current logical replication mechanism is only row based. If you are around MySQL world you will notice that statement mode is not supported. If you are not familiar with the difference between the modes, TL;DR no matter how many rows are involved on the source query, they will be shipped as individual rows into the slaves. That is, a multi-row single statement as an INSERT in the source will produce an entry per modified row.

This is something you may want to have in consideration when doing bulk loads, as there are other tools/techniques that could be a better fit other than streaming everything from the master using the logical replication stream.

The most important and yet probably the most complex is the Logical Replication Slot. The magic is done internally through the pgoutput plugin, which is the piece of code in charge of translate the WAL records (pg_wal) into entries in the logical log (pg_logical).

The whole picture can be briefed like this: Consumers subscribe to a single Publisher using a slot, which contains the snapshot (LSN) of the database (the given point in time of the cluster). The slot will provide the information to the engine about the point in time since the changes must be replicated.

At this point, is important to note that the full feature is not entirely commited and is expected to count with a WITH COPY DATA option at subscription event creation in order to synchronize data from source. Currently, the patch has some bugs and is in process of review.

Although the whole topic is interesting, everything related to Logical Decoding will be ommited on this article. You can do more than just Postgres-to-Postgres replication.

In the past versions, it was possible to reach a very flexible partitioning approach by combining inheritance and multi-language based triggers. The current implementation does not allow to mix inheritance and partitioning but still has some flexibility for detaching and attaching partitions, using an explicit syntax.

In the current example, we are going to create three partitions with no data, just for keep focus only on the POC.

The current concept works around on having slaves with a different retention policy of each partitioning by replicating each on different destinations and filtering the DELETE operations. As an addition, we are able to create a dummy structure, to point to each external partitioning for reporting or querying historic data.

The concept has three types of nodes/databases:

More or less, using the commands on this article, you should end with a picture like this: 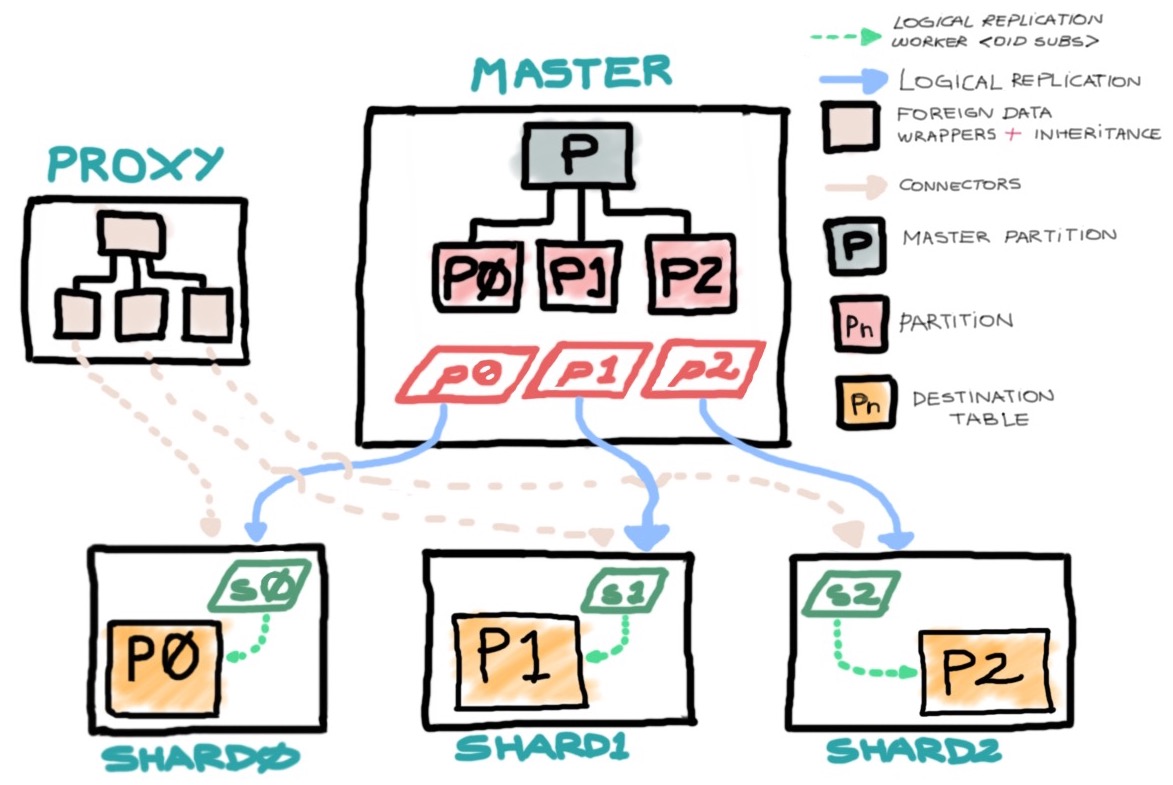 As you probably notice, by removing rows on the source database and filtering DELETE events at publishing time, you will end up with slaves holding more data, allowing larger timeframe queries. This is particularly useful for splitting BI queries in different layers depending on the date ranges specs, saving storage purposes on the source or keeping also a more maintenable table size. Queries against archiving can be done directly on the nodes or through the proxy implementation mentioned forward.

Partitioning on the source database/entrypoint

The master database will hold the definitions and the most recent data. The current concept, feeds from a Apache Kafka broker’s topic which is partitioned in three. We are going to feed this table with streams using COPY command. The article explaining how this was done is here.

The group_id column holds the topic’s partition number from which the data has been consumed from the Kafka broker.

Now, it is time to publish them within the corresponding event filtering. At this point, there isn’t associated any replication slot with the publications:

By the current state of the last commits on PostgreSQL, Logical Replication does not support filtering by column value as pglogical tool does. Even tho is possible to filter by event statement, which still quite useful for our purpose (NOPUBLISH|PUBLISH) as described above.

The table definition on the nodes should be straightforward:

We now need to create the SUBSCRIPTION to feed from the corresponding PUBLICATION on the master database. As the current implementation of the SUBSCRIPTION event does not support with copy data and the partitions are empty, we are going to create a logical replication slot on the source. This is easily done by using the CREATE SLOT clause. This means that it will set the LSN position from which the changes must be applied to the destination:

It is remarkable to note, that after subscription creation you will notice new workers in charge of sending and receiving those changes, as described in the image above.

As it is not the scope of this article, I’m going to skip the explanation of the [logical|streaming] replication slots in order to keep this readable. Although, it is a core concept of the replication feature.

Querying from an external database

This example has no other purpose than to show an already existent feature (although improved in recent versions) in action. But very specially I’m going to highlight the INHERIT on a FOREIGN TABLE.

The following DLL resides on a proxy database, which does not hold any data of the partitions and is only intended to show some relatively new Postgres’ capabilities.

As you may appreciate, we are combining inheritance, constraint checks and foreign data wrappers for avoiding queries to remote tables that do not match the group_id filter. Also, I attached an EXPLAIN as proof that none of the other foreign tables have been examined.

Hope you liked the article!