Implementing an Internal Network Load Balancer in GCP through HCL (Terraform) requires to place a set of resources as lego pieces, in order to make it work inside your architecture.

We are excluding the external option in this post as it is not oftenly being use for stateful services or backend architectures such as databases, which is the concern here. Also, its Terraform implementation vary in between strongly, e.g. certain resources such as the Target Pool aren’t used in the internal scheme mode, making the autoscaling configuration tied differently with its counterpart.

The iLB as shown in the current post, points to the node (through the Backend Service) that return OK to its corresponding Health Check (internal mechanics of this are commented in the Health Check section bellow ). Differently from a stateless fleet, for stateful services, only one node can hold the leader lock for receiving writting transactions. DCS provides a way to have a consistent configuration and k/v over a cluster of nodes, centralizing it and providing a consensus for them, avoiding split-brain scenarios or different configuration in the nodes. That is, it ensures that a single leader is acting in a cluster at all time. It may sound very simplistic at the task, but on Cloud environments this turn out to be crucial not only in the matter of consistency, but also in the level of provisioning and automatic configuration which makes an architecture resilient and reliable.

The flight view of exposed architecture of the iLB will look like this in a diagram: 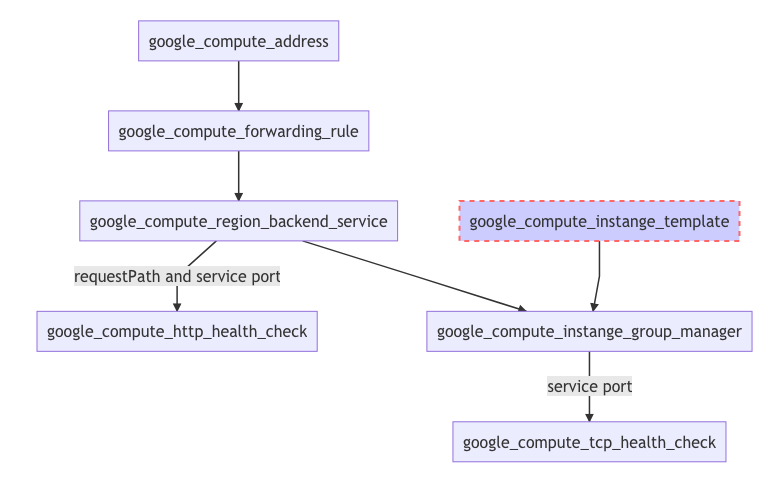 Note: Keep in mind that the iLB protocol is still TCP, although its health check (HC) is HTTP based. The other HC, TCP, is used for autoscaling purposes, and it re-spins compute if the API service is down.

There is no iLB configuration being parametrized in this resource, but it worth mentioning that the Autohealing block will point to its specific Health Check to check wether a service is available or not. Usually, for stateless services, we can use the same Health Check for the autohealing (or, at least is functional to do so); although, stateful services such databases, can return not available (503) response code from the API but it does not mean that the service is down, as it might have more complex statuses depending the request path/method (service is up, but can’t receive writes).

It is important to define an initial delay for checking the service, specially on stateful components that could spend certain time before they are available due to data transfers or provisioning. During development, you may want to wipe this block out, until your services are available, in the contrary the computes will be destroy in an endless loop.

As we are setting up an iLB, google_compute_region_instance_group_manager has been choose as it is compatible with its setup. This resource manages computes across a region, through several availability zones.

Consider an API through port 8008, wether it returns 503/200 response over master/replica methods. The bellow output shows the responses for both methods over the same master node:

These methods can be used for the Backend Service configuration for refreshing the iLB node that act as master or those for replicas (for RO iLB).

It is important to clarify that creating Health Check does not affect the other resources unless linked. You will prefer to define this resource even if your services aren’t up and running, as you can plug it once they are available (as it will be shown in the Backend Service section).

There is a legacy resource called google_compute_http_health_check, which contains the following note:

Even tho, for iLB, it is possible to use the newer resource (google_compute_health_check) and use its corresponding http_health_check/tcp_health_check block accordingly:

The autohealing health check can either be TCP or HTTP, just make sure that the HTTP API method returns not available only if the service is completely down.

Another recommendation is to keep your thresholds and check intervals relatively low, as it can amplificate the downtime per each added second.

An example of this would be the following:

The backend block provices the instances created by google_compute_region_instance_group_manager and health_checks point to the predefined HC above. One backend service can point to several Health Checks like built in the google-lb-internal:

This is not the case we want to configure here, but is an interesting heads up if you want to add more checks over more than one port.

Keep in mind that we are setting an internal Load Balancer, which is compatible with google_compute_region_backend_service , diverging from the external Load Balancer that require google_compute_backend_service. The difference is the level of the abstraction when provisioning nodes, which in the external, you need to end up defining resources more explicitely than using internal.

Forwarding Rule (FrontEnd of the iLB)

The Forwarding Rule is a resource that will define the LB options, in which the most noticeable are:

The load_balancing_scheme change will require considerable changes on the architecture, so you need to define this before hand when blackboarding your infra. Regarding the backend_service, this needs to point to the corresponding backend_service than you spin for the Instance Managed Group.

It is a common practice to predefine a compute address for the iLB instead leaving GCP choose one for us and, going further, you can prevent this resource to be destroyed accidentaly, as this IP is an entrypoint for your application and might be coded in a different piece of architecture:

All the above resources are core to the iLB setup, although there is one resource that even tho isn’t strictly part of the component, it must be specified to allow services and computes talk to each other. In this case, the source_ranges should match the corresponding subnet setup of all the above resources. If you happen to be in development phase, you can use 0.0.0.0/0 for wide opening the rule, although you may want to specify a narrow IP range in production.

I found an interesting article about Maglev, the Google’s Infra Load Balancer, which a series of posts explaining the internals, check it out.

Hope you liked this post, do not hesitate to point questions and comments!